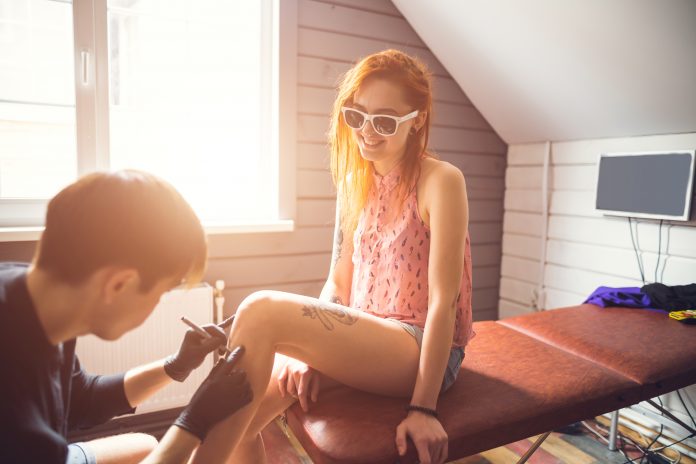 Tattoos have been around since the Stone Age. Egyptian priestesses adorned themselves with it, the Romans marked in this way slaves and criminals.

Archaeologists found Indian mummies in South America, whose skin had elaborate patterns. At the Dayak on the island of Borneo, every warrior’s hand was tattooed when he killed an enemy – a sort of medal on his skin.

Women wore special signs, such as weaving fabrics. That improved her marriage chances.

The natives of New Zealand are their “Moko”, as the Maori call their artful flourishes, sacred. Each family has its own patterns and figures. The tell the story of the ancestors, declare tribal affiliation and reputation of each moko-carrier. A tattoo is for some Maori almost something like identity card, birth certificate and family album together.

Tattoos were common in many peoples of Europe, until Pope Hadrian I forbade them in the Middle Ages and this type of body jewelry fell into oblivion in many places. 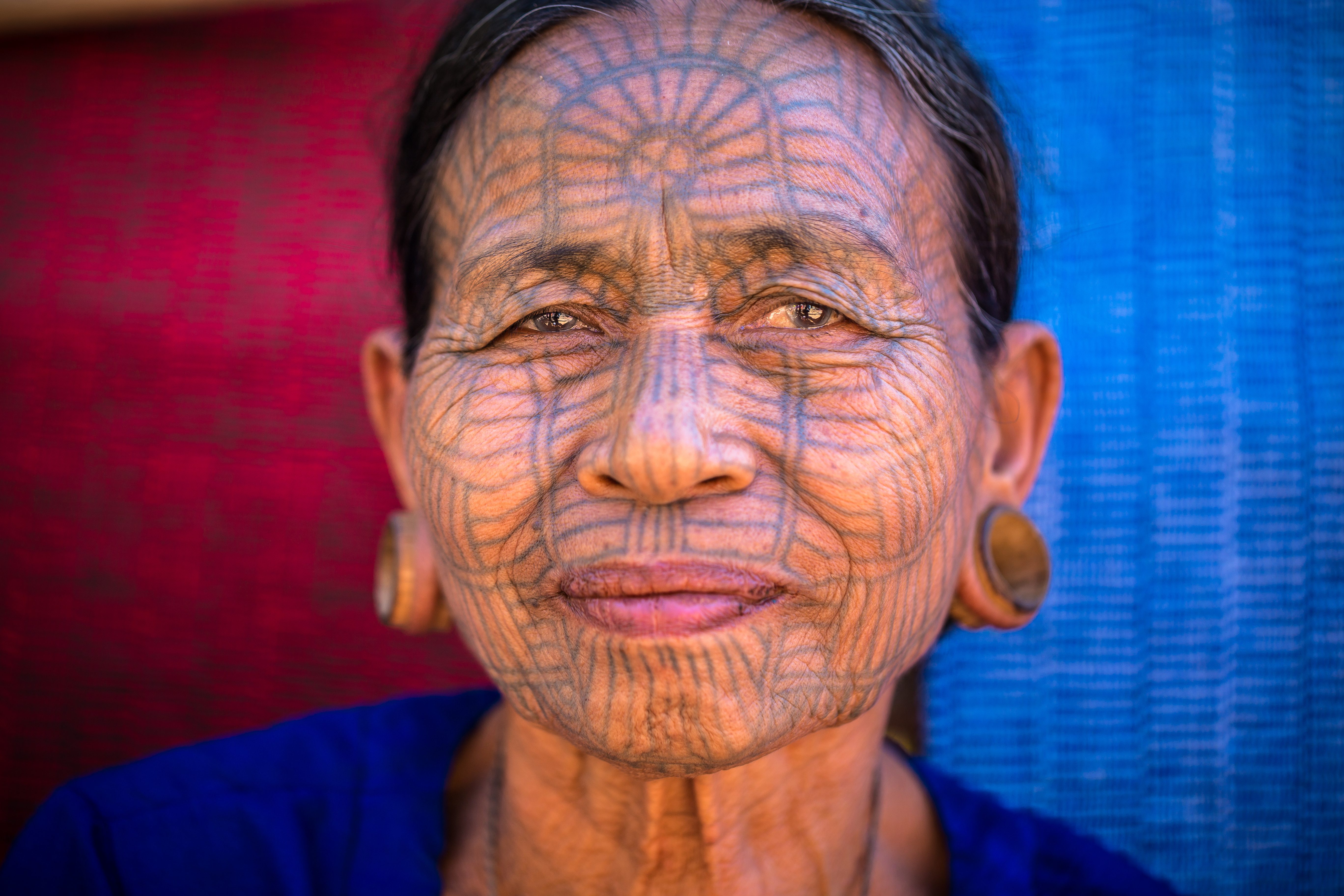 “Artfully hammered”
A thousand years later, European seafarers opened their eyes when they came upon painted people in the South Seas. In 1774, the Englishman James Cook brought one of these strangely patterned men with him back home. Cook had also learned on the island of Tahiti how this art was called there: “tatau” – which has become “tattoo” in English and “tattoo” in German. It means “artfully hammering”. Because unlike lipstick or eye shadow, a tattoo is not on, but painted in the skin. That’s why a tattoo lives for a lifetime.

However, in modern tattoo parlors not hammered, but stung. At the tip of a pistol-shaped device are needles that move up and down with incredible speed – like a sewing machine – and thereby inject paint droplets under the skin.

The process of getting a tattoo hurts a lot and leaves a wound that heals after just over a month. However, that’s not all: some of the colors can be harmful, some even contain carcinogenic substances.

You can also get tattoos with henna, which are only painted and faded after a few weeks.
Nevertheless, tattooing is “in”, and it frightens fewer and fewer people. If James Cook still had to drive to the South Seas, to marvel at tattooed bodies, one only needs to go out the door today. Around four million people have already had themselves tattooed in Germany, for example.

Tattooing is deep in fashion nowadays! However, as we know, no fashion lasts forever and there is a change that you may want to remove or update your tattoo.

What do you do if you want to change or remove a tattoo?

With a lot of effort and for even more money, the old color can be “blown away” by a laser beam. Moreover, with a bit of luck, not even a scar will be left on your skin afterwards.
Decades ago, tattoos were considered permanent, however, it is now possible to remove them with various treatments partially or even fully.

Once of the most effective tattoo removal treatments is laser removal method, but some people still use dermabrasion, salabration, cryosurgery, excision or TCA, that basically removes the top layers of the skin. Some people try to remove their tattoos with the injection or application of lime juice, garlic or wine. For more information about tattoo removal, read the article: Tattoo Removal

What to do before getting a tattoo?

Find the right artist
It is always better if you get tattooed by someone you trust. This person should be interested in your tattoo and you should also have a look at a selection of their work to make sure you like their tattoo style.

Get enough rest the night before
You should be well rested, relaxed and come to your appointment without time pressure.

Eat well an hour before the procedure
In no case appear with an empty stomach; otherwise, it can lead to circulatory problems.

Clean the tattoo area
It would be nice if the place to be tattooed thoroughly cleansed of sweat and old layers of skin. Try to scrub the area slightly with sea salt and clean it the night before.
The clothes should be clean, because if they accidentally touch the tattoo, they could otherwise contaminate the wound.

One day before the appointment, you should not consume ALCOHOL, DRUGS and not too much COFFEE. As otherwise tattooing can lead to too much blood serum escaping from the wound. This hinders the tattooing process and unnecessarily lengthens it.

You should not plan your appointment just before tanning or swimming.
Since the skin is damaged by a tattoo, it may be that inflamed by the sun, or softening in the water and thus destroys the tattoo and makes unsightly.

In addition, solarium is a taboo for three weeks after tattooing.
You should not visit the solarium at least 4 weeks before the appointment. This also applies to excessive sunbathing, so that the skin is not irritated and not too dark (facilitates good work).

Consult with your doctor if you have a special condition
If you suffer from epilepsy or are hemophiliacs, you should also do without tattooing. Otherwise, it can lead to collapse or loss of blood.

Pregnant and breastfeeding women should refrain from tattooing, since the potential effects of tattooing (endorphin and adrenaline) on the fetus are unknown.
Inform your tattoo artist about possible allergies.

If you are currently receiving medical treatment due to a particular health condition, a prior consultation with your doctor is beneficial.

The healing of fresh tattoos on a person with health problems can sometimes take twice as long, as in a healthy person.

Can I get HIV or other disease from a tattoo?

Very important to keep in mind, that if you have a sickness transmitted by bodily fluids (such as HIV or hepatitis), many tattoo places are not allowed to tattoo you. It would not only endanger the artist, but also other people. Fairness is important here!

Although, there are no known cases in the US of anyone getting HIV this way, it is possible to get diseases from a reused or not properly sterilized tattoo needle or other equipment, or from contaminated ink.

The risk of getting HIV this way is low, but the risk increases when the tattoo place is unlicensed, because of the potential for unsanitary practices such as sharing needles and ink. Be careful choosing your tattoo place.

How painful are tattoos? And how to make tattoos hurt less? 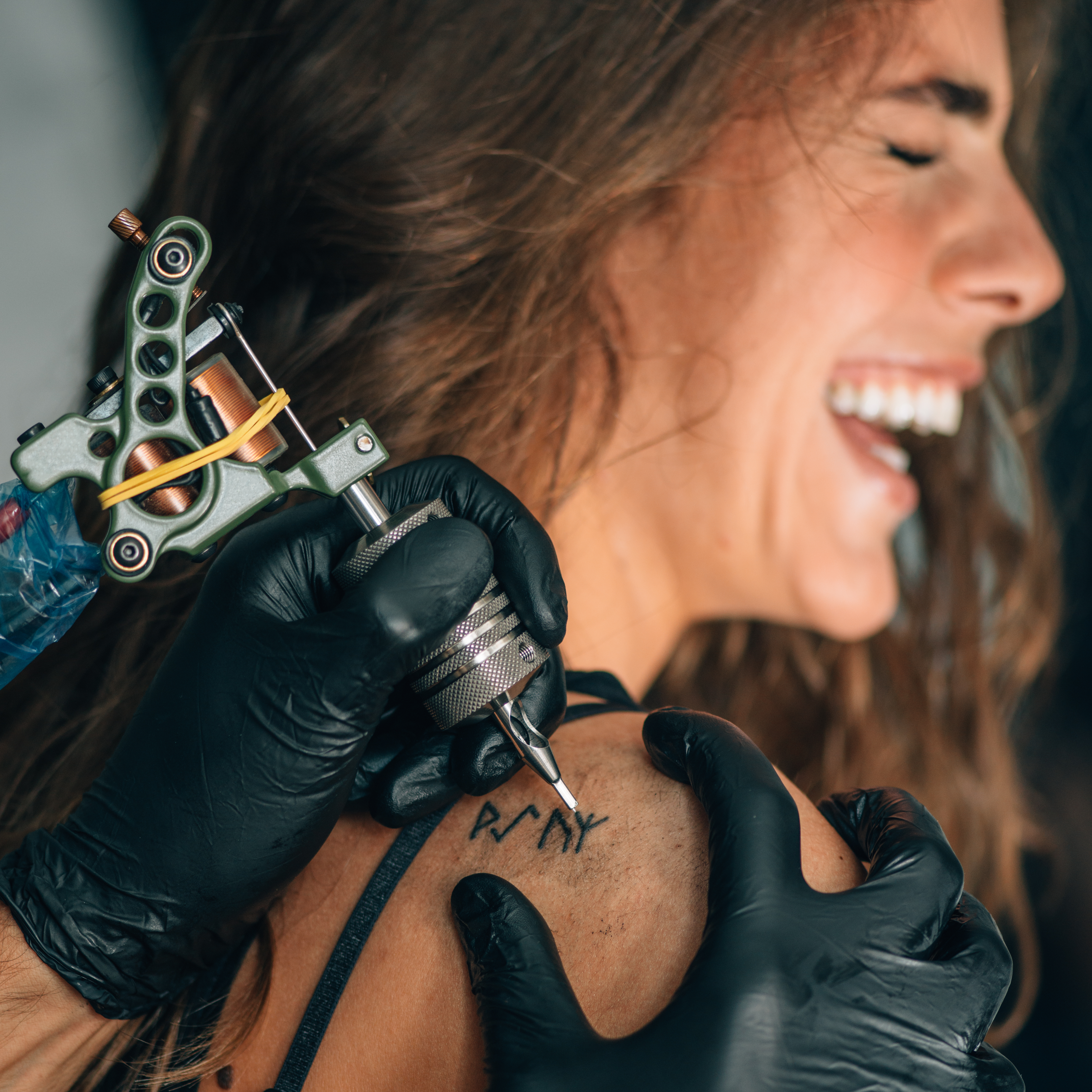 Tattooing hurts. Yes, and there is no way around it. However, the gradations range from “completely problem-free” to “AUA!”

How much the process of tattooing hurts depends on two factors: one person can decide for himself – the other Not. We are talking about the body part that is to be tattooed and the personal sensitivity to pain.

There are people who can be tattooed completely without batting an eyelid, while others complain of a small cherry on the shoulder blade. Your personal sensitivity and the part of the body part you choose to get a tattoo on.

Nature has provided us with a means to combat pain that we rarely use in a targeted manner: If you breathe properly, it will hurt less! One of the best ways to deal with a tattoo pain is a proper breathing.

Everyone has heard of the special breathing that the woman who is giving birth is trying to get along with. Of course you should not sit panting in the chair of the tattoo artist. On the contrary, you should breathe much more calmly than you usually do.

The aim is therefore to deliberately slow down the respiration. This is best done through the nose. A deep, slow inhalation is followed, if possible, by almost twice as much exhalation. You can only let the air out of your nose very slowly.

Our heartbeat calms down, the cramping of the body dissolves and the pain is no longer so intense. The relief causes the release of endorphins, which also contribute to less sense of pain.

In addition, sugary drinks, chewing gum or sweets make some individuals’ tattoo experience a bit more bearable. Bring it with you if you like. Also, your favorite music on the MP3 player or a friend can help to distract you from pain.

For longer tattoo sessions, it is best to take breaks in between, where you can eat something and have a rest. 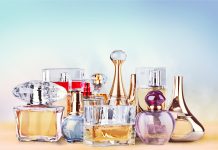 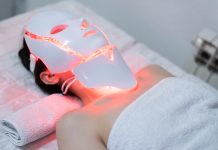 Best Healthy Habits to Have

Why is it better to use natural organic beauty products?