Almost every smoker out there knows that quitting smoking is the best thing they can do for their health. It is generally accepted that smoking is an addictive and unhealthy habit. Public health campaigns have created awareness in the society on the many health risks of smoking.

If you or someone you care about is a smoker, it is possible to quit. And health experts say it’s never too late to quit smoking. In fact, research suggests that your body starts to heal just 20 minutes after you quit smoking. Your heart works better and your blood pressure drops. Unfortunately, nice as this may sound, quitting can be tough and it may take you more than a single attempt to kick out that smoking habit.

Why is it hard to quit smoking?

What’s interesting is the fact that some people have really severe withdrawal symptoms while others don’t. At the same time, while some smokers successfully quit after one or several attempts, there are those who struggle to quit and can’t give up smoking no matter how many times they try. In the sections below, we will examine the question on why some people can quit smoking and other not. We will also discuss how one can quite smoking once and for all.

Why can some people quit smoking while others can’t?

Since smoking is one of the most common addictions worldwide, that has wide-ranging health implications, there has always been a discussion around how to quit smoking. Scientists have researched the topic and come up with numerous solutions from their findings. They have also conducted studies to determine why some people can quit smoking and others can’t. The researchers have discovered that your brain may have something to do with how hard or easy it is for you to quit smoking.

Researchers from Penn State university conducted a study with 44 smokers, aged between 18 and 45. The test subjects were first put in a functional magnetic resonance imaging machine (fMRI) to determine their brain’s responses to reward.

All the participants smoked at least 10 cigarettes a day but researchers instructed them not to smoke in the 12 hours preceding the experiment.

The test subjects were then asked to play a card-guessing game and they were not to smoke up to 2 hours after the game. However, during the game, researchers told half the participants that there had been a miscommunication and they would be allowed to smoke during a 50-minute break which was only 16 minutes away. Although they were allowed to smoke, the participants were promised a reward of $1 for every minute one didn’t smoke. Some didn’t smoke to get the reward while others just couldn’t resist the temptation to smoke.

Researchers found out that those who couldn’t fight off the urge to smoke for the reward had a weaker response in the reward area of the brain, known as the ventral striatum, when they had been put in the fMRI. Striatum is a part of the brain reward system that is essential for motivation and promotion of goal-oriented behavior.

The study suggests that there are some neurochemical changes that take place in the brain, making it harder for some people to quit smoking. They may have a strong motivation but still be unable to quit. Potential rewards for giving up smoking such as better health or the prospect of saving more may hold little value for such individuals. That’s why you might see a an extremely ill person, with evident smoking-related health complications, who still smokes; yet they desperately want to quit and live a healthier life.

How do you quit smoking?

While a large majority of smokers know the health hazards of smoking, with a big percentage even regretting ever getting themselves into the habit, most have no idea how they can quit smoking. Are you always asking yourself, “What can I do to quit smoking?” Well, turns out it’s possible to quit smoking despite the challenges.

To finally quit smoking, you need to understand the obstacles that stand between you and a smoke-free life and tackle them as addressed by medical experts. Scientists believe that there are three obstacles to quitting smoking; mental, physical and social components. They are all linked and you stand a better chance at quitting if you address all the three components.

Cigarettes contain nicotine, a highly addictive chemical. Nicotine produces a brain chemical that makes you feel good, also known as dopamine. Unfortunately, dopamine wears off and returns a smoker to their normal state of craving another cigarette. Smokers then develop a physical dependence towards nicotine and they have to smoke to feel ‘normal’.

There are seven FDA approved medications that help with the physical component of addiction and ultimately help one quit smoking. The FDA approves smoking cessations through their Center for Drug Evaluation and Research, to ensure that all the medical products you use are safe, effective and their benefits outweigh any known associated health risks.

The most popular FDA-approved smoking cessations are Zyban (buproprion hydrochloride) and Chantix (varenicline tartrate). The prescription-only drugs are available in tablet form and don’t contain nicotine. They can be used alongside the FDA-approved nicotine replacement therapies (NRTs.) NRTs helps a smoker to gradually overcome nicotine withdrawal symptoms by supplying the body with controlled amounts of nicotine while protecting you from the other harmful products in cigarettes. NRTs come in form of skin patches, chewing gum and lozenges. They are available, under various brands, over the counter and by prescription.

To determine the best medication for you, it’s essential that you first understand how smoking cessations work and their side effects. If you are considering using any medication to help you quit smoking, it is a good start to start reading labels for different products’ benefits and associated risks. Most importantly, you should talk to your doctor and other health care providers to know which of the seven options is most suitable for you.

Also, there are some phsycological factors behind nicotine addiction. Smoking soon becomes part of a daily routine. Most smokers tend to smoke at specific times; when feeling a certain way, driving, or after eating, just to mention a few possible scenarios. In your head, smoking can become like a good friend whom you can always rely on.

To tackle the mental obstacle, you must identify the moments and feelings that trigger an urge to smoke and then adjust or relearn your behavior so as to stay strong when you have a smoke craving. By developing a plan to beat the urge to smoke, you will manage those cravings more easily. You can always look back at the reasons why you decided to quit for motivation. 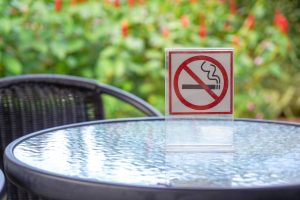 Another way to beat that smoking craving is by keeping yourself busy; keep your mouth busy with something like chewing gum, engage in an activity like jogging or taking your dog for a walk, learn to take deep, slow breaths when the urge to smoke arises, etc. Going to a smoke-free public park, store, movie theater and other smoke-free zones can also help you a great deal.

Many smokers develop a social circle centered around smoking. You might hear colleagues or friends go out for a smoke or someone borrowing a lighter from a stranger as a social ice breaker.

In the same way that certain social groups can plunge you deeper into smoking, social groups that support people trying to quit smoking can be very beneficial. A recent survey of people who have successfully quit shows that most reported that support from friends, family, co-workers, social groups and others was very significant to their success.

Many reformed smokers say the hardest thing they have ever done in their lives was quitting smoking. And among these people are heroes who have gained recognition for things like climbing mountains, successful corporate leaders and other great personalities. Evidently, it’s not easy to quit. It can take a smoker multiple attempts at quitting the habit before they finally get rid of smoking completely. But regardless of these struggles, we all know quitting is worth it.

Going paperless- new trend in business for the future

Plants & Herbs That Help Kill Bacteria In Your Organism

Top 7 Unusual Hotels in the World