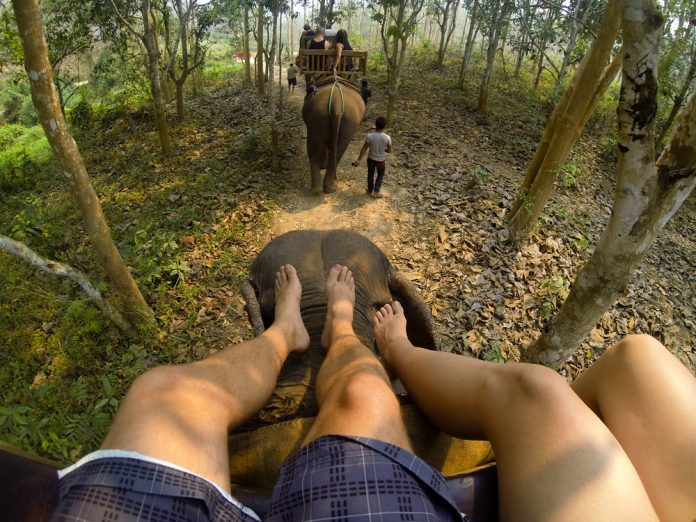 Riding an elephant -is it as fun as it seems?

Everyone wants to ride an elephant. Riding an elephant is a great experience until you realize what it means to the animals.

Many want to be carried on the back of the world’s largest beast but elephant lovers opt not to ride them. And there is a reason and a sad truth behind it.

Traditionally, years ago, elephants were used for logging and as war vehicles. Recently, elephant logging has been banned in many countries in the fight to protect them.

Many people love elephant riding simply because they think elephants are as friendly and submissive as they see them. This is not the truth. Elephant is a wild animal, and there is a lot that has been done to make the elephant obedient to human commands. Elephants are not human-friendly by nature, they are forced to act as our slaves, to entertain us.

The elephant undergoes a very painful experience in the human struggle to make it break its spirit. The spirit breaking process is what has made many people find riding an elephant not friendly.

It is our responsibility as human beings to take great care and to protect wild animals. It is quite unfortunate that instead of taking care and protecting elephants we tend to torture them in one way or the other. Instead of giving them an ample habitat, we’re destroying their homes.

Here are some of the reasons why you should not ride an elephant:

An elephant has to be trained to live with human beings. The process is completely inhumane. A baby elephant is captivated at about 10 to 12 months old. The process to separate it from its mother is very cruel as some elephants trying to protect it are injured and even killed. It is then chained and a series of torturing begins.

In the process, the baby elephant is confined in a very small space (a cage or a hole), beaten. Simultaneously starved, pierced with bull hooks or nails, deprived to sleep for some days, and even burned to inflict pain. The whole process forces it to submit to human commands to avoid pain. It also leads to post-traumatic stress disorders.

The captivated elephants are denied adequate water, nutritious food, and veterinary care. They are only kept with the aim to make some money from tourists but not to protect them. Some are overworked by being forced to carry human beings for more than 10 hours a day even in the hot sun.

Elephant’s backs were not meant to carry heavy weights. Standing for long hours on hard surfaces contributes to arthritis, foot and back problems. When they aren’t working, they are chained and kept in sheds or shacks which have hard floors. They are also denied ample time to rest and interact with nature. Many elephants die in the hands of mahouts who fail to take a proper care of them.

The demand for elephants for riding is very high. This has increased poaching since a 2-year-old elephant can cost up to $35,000. In the process to captivate the young elephant, its parent undergoes brutal beating and sometimes killed when they try to rescue the captivated young elephant.

Riding an elephant  –  It may be dangerous.

Despite the brutal training elephants sometimes disobey their masters. Falling from the back of a running elephant is what you will never want to imagine before the ride. The elephant doesn’t take you as a friend but as a master to be obeyed. When not happy the elephant can cause physical injuries.

Having said that elephant riding isn’t appropriate, I do not discourage the entire elephant tourism. You can visit the elephant sanctuaries and walk with them. The already captivated elephants can’t cope with wildlife, they still have to be fed and cared for by human being.

Sanctuaries are now taking these elephants and using them in a friendly way to get money to feed and take care of them. Promote the caring sanctuaries who doesn’t support elephant riding by visiting them instead of visiting the camps. It is only by avoiding elephant riding that the demand for captivating elephants and the brutal treatment will depreciate.

What is Normal Bowel Movement – Natural Ways to Activate It

What is a Toxic Relationship? How to Determine And What to Do?

Hobbies That Can Bring You Extra Income

What You Should Know Before Drinking Lemon Water