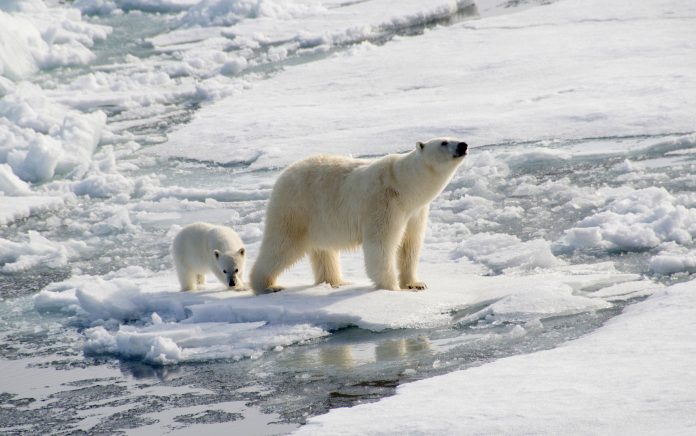 Polar bears are carnivores that reside within the arctic circle, comprising of the Arctic circle and its environs. They are majestic creatures as they portray boldness with each and every stride they take. Polar bears are actually considered as marine and not land mammals – this is because they spend most of their lives on the sea section constantly swimming and hunting for food. unfortunately, however, more and more awareness arises regarding the polar bear extinction, and there is a real reason for that.

Polar bears can swim constantly for days, harnessing a speed of about 6 miles per hour. They do this by laying out their hind legs flat like a rudder while they use their front legs for steering.

Polar bears are poor hunters. This is despite their acute sense of smell that enables them to sniff out their prey from a kilometre away. They thus have to spend almost half their lives in constant search for food.

Polar bears are actually black, not white. As opposed to what we always perceive visually, polar bears are black and not white. Their fur is translucent, with a jet black skin concealed underneath. The fur only appears white because it reflects visible light.

Only 2% of polar bear hunts are usually successful. Their diet mainly consists of ringed and bearded seals as they require large fat amounts in order to survive. Therefore, as the ice area gets smaller and smaller, polar bears need to walk more miles and lose a lot of calories.

The option like birds and others that reside in the iceless areas are not enough and are harder for the polar bears to hunt on. Thus mother polar bears very often can’t provide enough food for their kids. As a result of this, they are highly prone to extinction.

There are 19 sub-population units of polar bears left in the world as recorded by scientists. This sub-population is experiencing a rapid decline due to constant climatic change.

The main reason as to why this is so is due to the fact that their natural habitat, the sea ice, is on the verge of the total potential loss. This is due to the violent shifts in climate, specifically global warming that depletes the Arctic Circle regions. As a result, polar bears are listed as an endangered and threaten species by the US under the Endangered species Act 2008.

Are they really important?

Before we get to what we should do to protect them, knowing the role these mammals play in our ecosystem is important. Polar bears contribute to the overall health of the marine environment because they are on top of the food chain hence help create a balance to marine life.

Polar bears are also the pride of the polar regions. They are majestic, good-looking and cute. No wonder they form most of children dolls since a long time ago. Despite polar bears being ferocious and aggressive, their appearance is totally the opposite of this as they look friendly.

Polar bears have for a long time played an important role in the cultures of people residing in the Arctic. They are a symbol of power and strength as well as calmness and tranquillity. They are thus worshipped by these communities with their emblems being treasured and adored.

What can we do about polar bear extinction?

Having mentioned this, we ought to appreciate the role they play in our world today. We do not want our daughters having big teddy bears in their rooms without really knowing where they came from. We do not also want the total extinction of a creature that was and still is bold and beautiful. One way of showing appreciation for these creatures is by making an effort to preserve them. We can do this by:

All these are in an effort to achieve one core function and that is to reduce global warming. The Polar world is dying and that is due to our unconscious lifestyles that happens to indirectly affect the Arctic.

Knowing the contribution we have on the life of polar bears is just a start, taking measures to resolve them is the real deal. If you have any other ideas that may help protect polar bears, please share in the comments. As much as we may not appreciate it, every good deed always comes back to us. Let’s all embrace the change.

Recommended for you: Why Do We Need to Protect and Save Trees?, 10 Tips to Stop Plastic Pollution, Reasons Why We Should Protect Wild Animals

Can I Get Rid of Dandruff Completely?