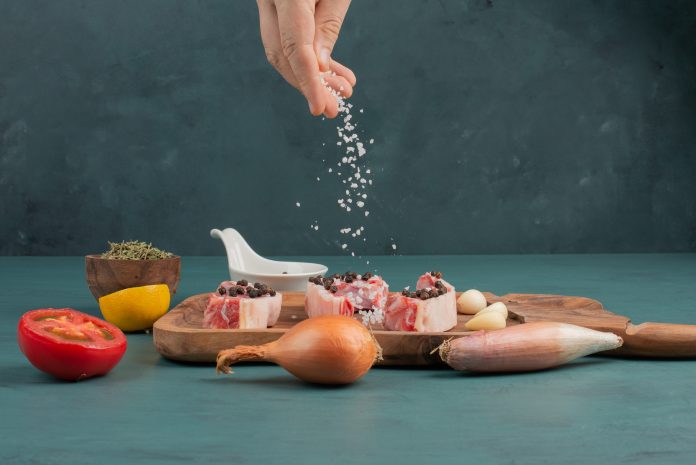 While you may use a variety of herbs and sauces in your cooking, salt is perhaps the most important ingredient in your food. Although salt enhances the flavor of meals, too much of it may – and frequently does – have severe health effects. Salt is a fantastic flavoring component. It improves the taste of your food by enhancing the flavor of your meals. Every day, our bodies demand that we consume salt. We all know that salt makes the food tasty, what else, do you know other important facts about salt we eat?

Here are some important facts about salt:

We meant it when we said 101. If you’ve never given salt in beautiful shakers or elegant grinders a second consideration, you should know that it comes from salt mines or is evaporated from saltwater. Salt is mostly composed of sodium chloride (often referred to as just sodium on nutrition labels) – a mineral found naturally in foods. On food labels sodium is indicated milligrams, which is not easy to comprehend. To know exactly how much salt it contains you need to multiply indicated number by 2.5. If there 1000mg of sodium that means it contains 2.5g salt or 1/2 teaspoon. That’s all the science for now. Then there’s the rest of the information that you should be aware of…

Table salt has been refined and generally contains an anti-caking agent, allowing it to flow smoothly from the shaker and onto your meal. Among all other edible types of salt table salt contains fewer impurities. In some countries iodine is included in salt to prevent iodine deficiency.

While your body does require salt to operate correctly, the amount consumed daily is far less than the typical person eats. The required quantity of salt is about 2300 mg according to Dietary Guidelines for Americans. However, American Heart Association recommends consuming 1500mg as the perfect amount, while the typical daily intake is higher than 4,000 mg. Eating processed meals is one of the main reasons behind this. 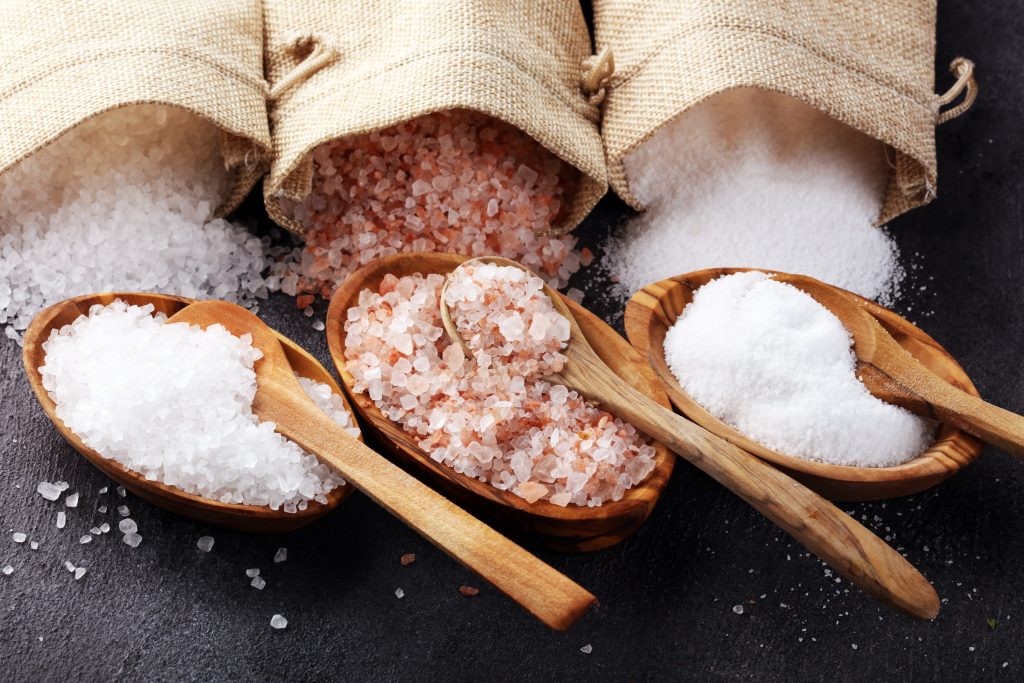 You may go insane trying to decide between pink Himalayan salt, sea salt, and plain white salt – what’s big deal? “To put it succinctly, nothing.” Simply put, salt is salt. Because sea salt and pink salt have a stronger flavor, you may need to use a little less of them altogether. Furthermore, certain salts may have slightly more minerals than others. For example, sea salt contains small amount of minerals and more impurities. However, the health advantages do not exceed the possible minerals you may be receiving, and using another form of salt is not justified.

Himalayan pink salt has its unique color due to trace amounts of iron oxide. Many people prefer pink salt for its flavor, but what distinguishes it from other salt types is mainly its color.

Sure, we have a good sense of how much salt we’re eating when we add it ourselves, but many foods – some less evident than others – are high in sodium. Peanut butter, soups, ketchup and deli meats are examples of food that are rich in salt that you may not be aware of.

Some foods are rich in sodium even though do not taste salty. Here are some foods with high-sodium level:

5. Dietary Sources That Are Surprising 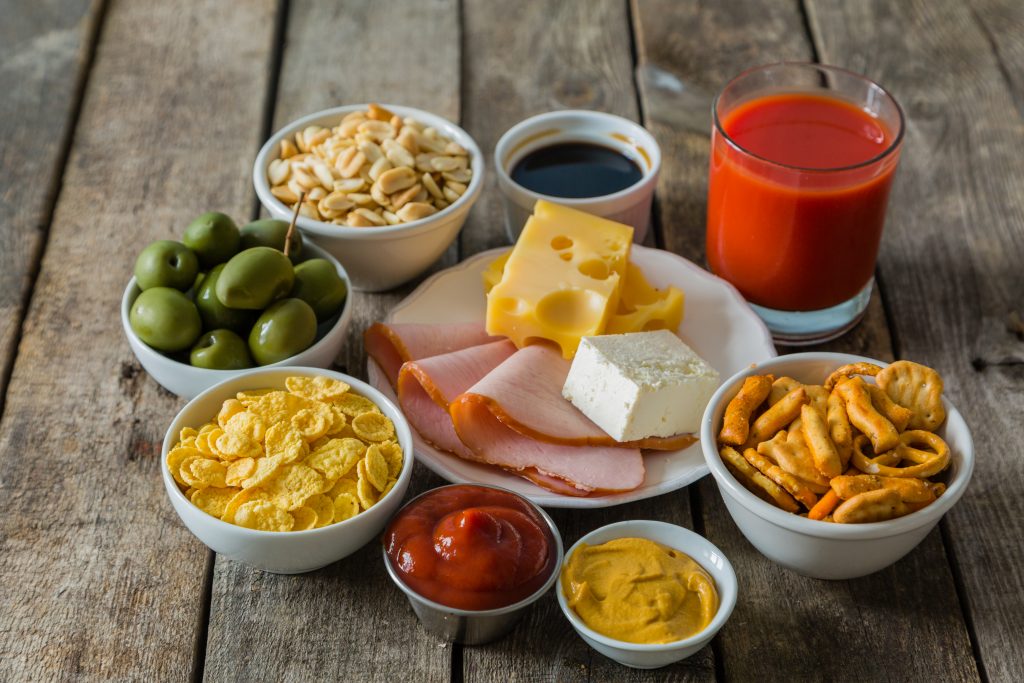 When it comes to salt intake, processed foods, and a heavy hand with the shaker will undoubtedly put you in the red zone, but what about restaurant meals and, dare I say, dessert? The bulk of salt we consume each day comes from unidentified sources, such as the brownie sundae you had after dinner. For example, a large Oreo cookie blizzard from Dairy Queen has 670 mg of salt. Or a large turtle pecan master blast from Sonic has 1,970 mg-yet another reason to be cautious when buying sweets.

If you’re feeling bloated, you might want to reconsider your eating habits. Foods that is rich in salt cause the body to retain water. The main advantage of lowering salt intake in the short term is that you won’t be carrying as much fluid on your body. 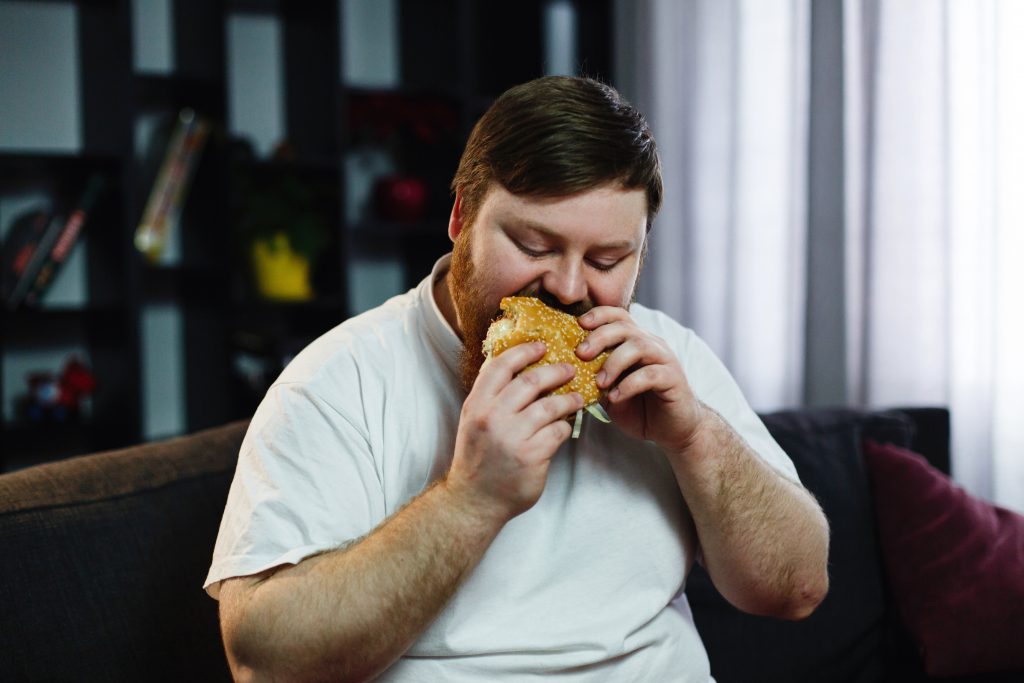 Since salt has no calories, how can it promote fast weight gain? Excess salt intake, according to experts at Deakin University in Australia, not only makes you want unhealthy foods, but it also makes you eat more in general. The formula is straightforward: the more junk food you consume, the more weight you may anticipate gaining around your middle. You may admit that once you start eating crisps or crackers it is difficult to stop.

We consume too little potassium and too much salt in our food, which can cause electrolyte imbalances. It’s critical to make salt reduction a daily priority, as well as eating more potassium-rich foods like melons, bananas, and coconut water. If you exercise frequently, it’s critical to maintain a healthy electrolyte balance to avoid tiredness and muscle cramps. 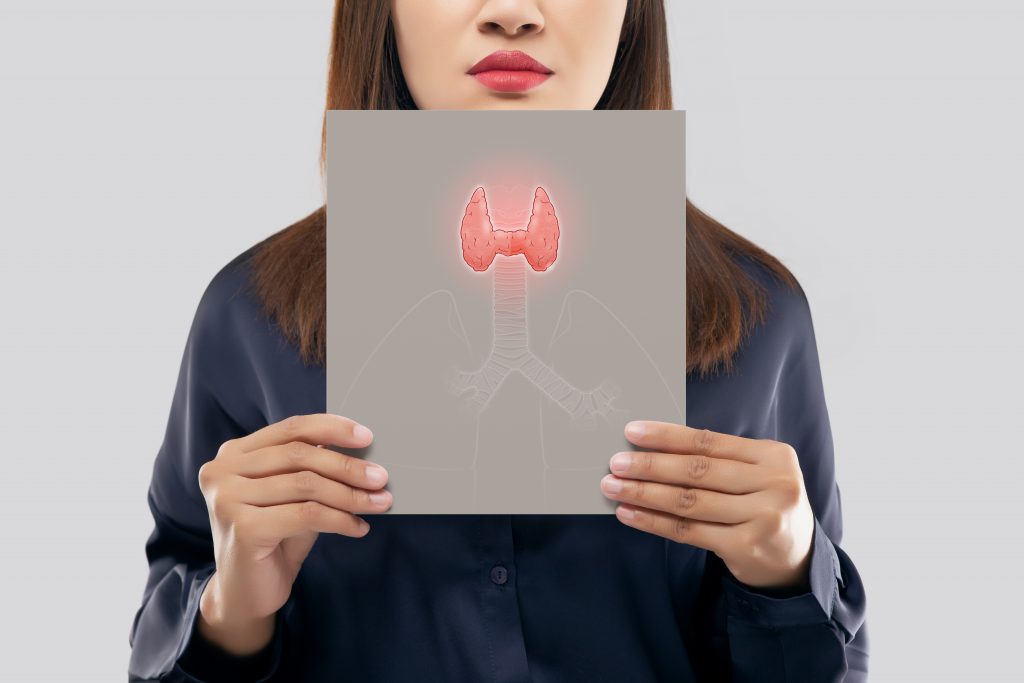 The thyroid gland is a little gland at the front of our necks that produces hormones that affect food metabolism, sexual function, and mood. Iodine deficiency can lead to enlargement of thyroid gland and its malfunctioning. Although iodine is required for thyroid function, it’s important to note that reducing our salt intake (which typically contains iodine) will not result in a deficiency. It is because we’re currently consuming so much salt in excess that we’re also consuming excess iodine. Similar to deficiency excess amount is also harmful to your thyroid and other hormones.

Consuming too much salt, which we all do, may have several severe health implications, including high blood pressure. While it’s simple to claim you’ll just quit using the salt shaker, the hard thing is that processed foods contain 75 percent of the sodium we consume, making it even more vital to read labels. Nutritionists recommend limiting intake of sodium if you want to reduce the risk of heart diseases and other health problems.

Although there are some health benefits to consuming modest amounts of salt, it’s important to understand that lowering your intake will provide you with the most benefits. Don’t get too salty just yet-the spice doesn’t have to be fully removed. But do not forget  about its consequences and why it’s one of the dietitians’ pet peeves!

Why Do We Have Food Cravings

8 Food Combinations You Should Avoid

Products that help you to stay full for long

5 Frightening Effects of Fast Food on Your Body

5 Effective Ways to Spice up your Marriage

At What Age the Skin Starts Aging?